The subscript function of eact maker replace all alphanumeric characters by small characters that exist in your calculator. There is no greek or small "/" in your calc so it can't write it. If the char is not alphanumeric, it write the normal character (X_Î± should write XÎ±, this is a bug thank for your report )
And yes I know there is hudge space between letters I don't think it's possible to find a better way to write in subscript for prizm (tell me if you find it).

I am inspired by the tex syntax, but it is not the purpose to totally support it. An example : function without parameter need a ";" at end because if you write this in tex "\function test" the space doesnt appear, and I don't want to have question every day by person who ask why. (And I can't write automatically the space because if you write "3+\i2" we don't want space here)
So to write alpha, you need to write "\alpha;" I'm thinking to put a "pro" mode to have the possiblity to remove this ";", but it's not the priority.

I've been looking at the color functions (Marker and Char).
It is possible to use markers not allowed in the editor of the calculator. See the example below: 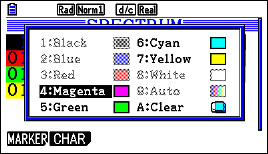 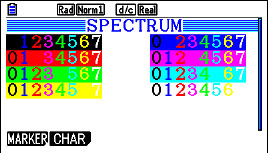 Do not know if it will be easy or not we put this function in generator. This function will also change (increase) the file size in header, etc...

Anyway, the way how the color work is almost known:

spoiler: Show
In files, hex of colors appear at the end of the line (that uses colors) after the text and the align bytes. Layout:

Each byte (hex) used to set the color of a character, is constituted by two digits:

And the color codes:

Suggested Latex code for editor:
\color{a}{b}{c}
where
a = marker
b = character
c = text

Possible limitations: User should put a new color tag in each row.

Until Monday, I will not have much time to work on this function...

Then I'll see what I can do (but I do not promise success).

gbl08ma wrote:Now all we need is a WYSIWYG editor so we can see the result of the markup we write right in the web page

Good news for the color

for the WYSIWYG, I will see if it can work, but not this week I don't have time.
Top

Instead of a WYSIWIG, I would much rather have reverse converter -- the one that takes .GxE and outputs .txt file with appropriate markup and utf8 encoding. Would that be easier?
Top

I would like to have the feature nsg suggested too. It is maybe more important than the WYSIWYG.
And when I say a WYSIWYG editor is important, it's not just a mere LaTeX editor - it's also the one that takes account the the calculator's screen and font dimensions.
More or less like a on-page calculator simulator.
tny.im URL and email address shortener | Casio Prizm Add-ins
Top

The reverse converter is possible, but it takes time to create (I can't do it before summer if I do it..), and we have other things to do on it, like support anothers format.
Actually you can save the source file to edit it after (save and load button, the format .eam is just a kind of txt with title format and text in utf8 encoding)

For theses two feature : they are no priority, because we prefear support more format before add "hard" features :/ Maybe in some months , but I can't promise it. But The reverse converter has more chance to be done than the WYSIWYG
Top

Upss, the alignment does not use only "00"... has some special bytes instead of zeros , when using color...
And I have not the faintest idea of how to calculate.

But the align with "00" for lines (already implemented in the generator) instead of this custom hex works!

Ziqumu wrote:The reverse converter is possible, but it takes time to create (I can't do it before summer if I do it..), and we have other things to do on it, like support anothers format.

Yes, more importantly will be add other formats and support more calculators... And only then (MAYBE) create a function to import/parse files (what is more difficult, especially recognize mathematical functions in files)...

gbl08ma wrote:And when I say a WYSIWYG editor is important, it's not just a mere LaTeX editor - it's also the one that takes account the the calculator's screen and font dimensions.
More or less like a on-page calculator simulator.

Juju is creating a prizm font (in omnimaga) from a ahelper font dump... Simulate the text with this font is not difficult. The problem will be the mathematical formulas (again).

(and you was right gbl08ma, it's not possible to put a not strip inside another

as far as you know about eact fromat, is there way to let strips share their memory? Like stat strips has access to same lists as run-matrix strip in the same eAct? Or, to make "calc" segments share its variables with the strips?

I am pretty sure it is not available from the UI, but maybe there is a way to hack the file to make 2 pointers point to the same shared area or something like it.
Top

I think it's not possible : when you write a note strip, you write a strip header (giving the title of the strip and the destination program @eact, or @runmat...)
Then you write a "file" like a g1e : just miss the first part from the header and some constant values change.

And I think it's the same operating for all strip : you write a "file" just after the call to the strip. So I don't think you can share this "file". The only possiblity I see, it's to make an addin that edit the g1e file to synchronizes two strips (or the strips with the calc memory). Maybe there is an another way, using bug : sometimes when I do something wrong on the file, if you edit a part of the file another part is edited too, but I don't know where, why and if it's possible and not dangerous to use it.
Top
Post a reply
25 posts • Page 2 of 3 • 1, 2, 3